Misconceptions About Islamic way of Killing Animals and HALAL 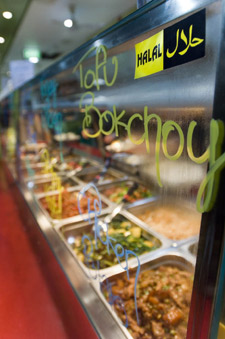 Bismillah,
I came across a article this post called, “Killing Animals and HALAL” in the blog called All About Buddhism. It contains several misconceptions about the Muslim way of killing animals, so I left a comment in it explaining them. I think it is good to post it here too, so I am reproducing that article below together with the comment I left in that blog. I would be happy if you joined in this disussion and share your views and any experiences you have had or heard on this topic through the comments section below. Thanks in advance.

In Buddhism, killing a living being is always considered to be a sin as we have no right to take some other living creature’s life. But as I can see in other religions there are variations for this.

Muslims do believe in animal welfare “Whoever is kind to the creatures of God is kind to himself” (Wisdom of Prophet Mohammad; Muhammad Amin; The Lion Press, Lahore, Pakistan; 1945)

They have regulations in meat. But… He hath forbidden you only carrion and blood and swine flesh and that which hath been immolated to any other than Allah.. (Quran Chapter II , Verse 173) The prophet has forbidden flesh only if it is not a sacrifice for himself. Does that mean he always expect sacrifices from men?.NO. Obviously he can’t be that much cruel to accept meat from billions of people per day!.

That sacrifice ritual is called HALAL ( correct me if i am wrong ). As I know the original ritual of killing an animal is, the killer should be on a plate which is heated to become red and kill the animal. That ritual make sense, as no one would do such a commitment to kill another. So, he meant not to kill ( in an implicit way ). But the time has changed, you wouldn’t believe how the ritual carried out now. They use a red colored plate as the seat when killing animals. You really can’t symbolize a ritual in that way. But they perform other ritual there. That is never show the weapon to the animal before being killed :).

The religion should sometimes be adapted to the current society , but not in a selfish manner like this. I don’t think this post would hurt Muslims ( as I didn’t criticize holy prophet ) . This is what I see as truth. Always open for debate.

Firstly it says, “The prophet has forbidden flesh only if it is not a sacrifice for himself. Does that mean he always expect sacrifices from men?.NO. Obviously he can’t be that much cruel to accept meat from billions of people per day!.”

Correct me if I am wrong but this statement implies that Muslims kill animals as a sacrifice for Muhammad! This gives me the feeling that the writer of this post is ignorant of Islam. FYI – prophet Muhammad is just a human being like you and me. God (‘Allah’ in Arabic) choose Muhammad as a messenger (prophet) to mankind to guide them in the correct path for our benefit in this world and the hereafter.

You may already know that Muslims sacrifice animals on occasions like Haj festival or when a new baby is born etc. If a animal is killed as a sacrifice that should only be in the name of God not for any human being or anything else. And also God is not in need of our sacrifices like this article tries to imply. A animal sacrifice is done only as an act of worship through which the person/s sacrificing the animal intends to seek God’s pleasure and gain good deeds for them. (note: What matters here is the intention. You can eat the meat of the sacrificed animal just like you would if you had killed it for food but it is encouraged to be distributed among the poor and needy.)

And what is this rot about Halal procedure that a plate needs to be heated etc. etc. Halal means anything that is permissible for a Muslim to consume or use be it clothing, employment etc. not only meat or flesh.

In the natural state meat or animal flesh is not Halal. If a Muslim wishes to eat meat it should be made Halal (i.e. lawful) through a simple ritual. This ritual requires that you kill the animal by cutting its throat and when cutting you invoke God. (you invoke God by saying “Bismillahi Allahu Akbar”). After this ritual the meat is Halal and you can consume it.

Also you must remember that only a few animals are Halal (lawful) to eat. These include camels, cows, rabbits, some birds, goats, horses among a few more. It should also be noted that fish or any creature that lives only in the water need not be made Halal. They are suitable for consumption whatever way they are killed.

Animals that have claws, or sharp teeth and prey on other animal (e.g. cats, dogs, vultures, tigers , lion etc) and repulsive animals like snakes, lizards etc. and animals that eat dirty things (e.g. pigs etc) are not permissible to eat even if you do the Halal ritual on them.

I hope I have explained about Halal. If you have anything about it I would be glad to discuss it with you.

This entry was posted in Islam, Misconceptions, Religion. Bookmark the permalink.