Today marks the first anniversary of the horrific earthquake that hit parts of Pakistan, India and Afghanistan in October 8, 2005. To be honest back then I was busy in my own world struggling to cope with my studies and other problems and the earthquake had only been a news item that caused some momentary sadness but soon faded away to be replaced by other things. Sadly it’s only now I understand the its gravity and the misery it caused.

These facts and figures of the earthquake from pakistaniat.com shows the magnitude of the devastation (and the state of support and rehabilitation!) 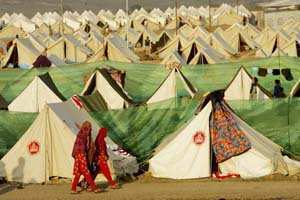 Yesterday I watched in TV as they aired a short documentary about this horrific earthquake and the destruction it had caused. They were describing and showing the rubbles and the squalid conditions many survivors were living. YaAllah it was dreadful. A victim interviewed said he only wanted some building material to rebuild his house so that he can move his family to it. He was still living in a makeshift tent with his family. This is only one mans story, how many maybe out there? Looking at those fragile tents and huts it’s a wonder they survived the harsh Himalayan winter just after the earthquake in those conditions.

What was even more painful to see was their devotion to Almighty Allah. One would expect after such a calamity to see peoples faith weakened. But not this peoples. They were praying among the rubbles outside their tents and in makeshift tent mosques. They were finding faith in Allah to be so consoling to the misery around them. Even the western journalist from that documentary was moved by these people’s faith and attitude towards Islam in the face of absolute wretchedness and a bleak future. It reminded me of the Asian Tsunami, in which religious people were awestruck by the power at God command while for the atheists it was confirmation of the non-existence of God. Indeed calamities are a test of our faith. I pray YaAllah may you help these people and grant them good in this life and the hereafter. Ameen.

As usual the ATP website has put up a great post – Picture of the Day: Forgotten – covering a broad range of issues concerning the earthquake from philanthropy to failure of proper disaster management to lack of sufficient media attention towards the whole issue during the past several months until the anniversary. The last sentence of it is so true I’ll repeat it here, “Everyone, and I mean everyone, will say that we must not forget the events of October 8, 2005. And then everyone – nearly everyone – will do exactly that. Forget.”