About US Threat to Bombing Pakistan Back to Stone Age

Bismillah,
It is better late than never Pakistan President Musharraf told the truth about Bush government’s threat just before the 2001 Afghanistan invasion to bomb Pakistan and send the country back into the Stone Age. This was what political analyst like professor Juan Cole had suspected from the very beginning. In fact this may only be the tip of the iceberg, nevertheless we have reached the next phase of awareness.

Given the circumstances of that time period it seems that was the only option for a pariah Military ruler of a third world country. Pakistan might be a nuclear power but it lacks the economic clout of a strong nation. For all we know US would have nuked Pakistan and destroyed its entire society and the American people and the world would have justified it. They can lie and lie successfully but they cannot hide the truth. I am sure Pakistan was not the only nation bullied and coerced to toe the line. 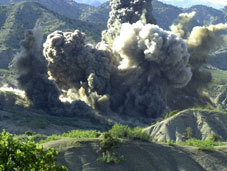 But why should America bomb Pakistan? Pakistan didn’t do the 9/11. Why should America hurt innocent people and reduce a country of 140 million people to rubbles? No civilized person can accept any explanation for such an outrageous action or suggestion. If US ‘suspect’ Pakistan has terrorist they should work within the framework of law not undermine it and create a state of lawless breeding grounds of terrorists. What evil force drives the, “land of the free,” The United States of America? Is this what US democracy is all about in the 21st century, threatening and bribing other leaders and governments into passive submission?

Partners in the ‘War against Terror’ are indeed not but the coerced and fearful of being bombed like Afghanistan, Iraq, Palestine, Lebanon and others. America has destroyed entire nations with ruthless bombing and a conviction based on suspicion. Even neo-cons are finding it impalpable as the realities of the ‘War on Terror’ unfolds. “Just agree with everything we say or else we will fire up our army and make a fortune from the reconstruction of your country,” This is the United States way of dealing with anything against its interests. This is tyranny at its worst and most disgraceful. Attack anyone who doesn’t fold to your demands. Thus it’s not surprising to see despite Musharraf’s comments Bush is still trying to keep him in the ranks.

Since climbing the Bush bandwagon, president Musharraf’s regime has obediently killed thousands of its civilians (so easily termed and forgotten as “Al-Qaeda” terrorist) and jailed many more to a fate unknown. All this for the good will and green bucks doled out by the western masters as trips to White House and economic aid. Pakistan should fight terrorism not for the Americans but for Almighty Allah because it is evil and harmful for everyone. The Muslim people today also ask all rulers of Muslim countries, WHY they became complicit in the American “Al-Qaeda” and “War on Terror” manipulation?

If Pakistani rulers and people learn something from this it should be this. Pakistan should as fast as possible develop in industrial, educational and infrastructure and move towards stronger ties with other Muslim countries by formulating common defense agreements and international policies. If not like the rest of the developing nations, Pakistan will continue to be a pawn that can be tossed and trodden like beetles. If not humiliating as it is for Pakistanis to be treated like this by America today, but it might be by many other global powers tomorrow.

This entry was posted in Afghanistan, Pakistan, Terrorism, USA, War. Bookmark the permalink.