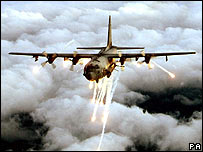 Bismillah,
August 10, British police revealed the alleged plot to blow up about 10 civilians jetliners over the Atlantic using disguised liquid explosives. So far media reports claim British and Pakistani authorities have arrested 41 people in the two countries in connection with the suicidal plan.

Just as the Lebanon conflict eclipsed the events in Iraq, the alleged terror plot to blast civilian jetliners over the Atlantic has overshadowed Israel’s wanton destruction of Lebanon, where thousands of people are starving to death. The manner the terror plot was revealed has shifted the world attention from Israeli terror to the so-called Islamic terror and helped Israel to keep its war crimes out of media channels.

I don’t dismiss the alleged terror plot as a Western conspiracy or protect those behind it. Rather I question claims made by London because both London and Washington poured on us heaps of similar claims – which were never proved – before the 2003 invasion of Iraq with the claim of Weapons of Mass Destruction.

If those suspects are found guilty they should be punished, for those who kill or intend to kill innocents civilians are a threat to humanity. Terror is not the answer to state terror.

This entry was posted in Israel, Terrorism, UK. Bookmark the permalink.